It All Started With Opium 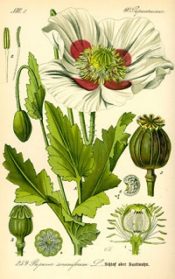 Opium gained great popularity in Europe and the European colonies in the 18th century and became a key ingredient in medicines that people could easily obtain without prescriptions.

One of the first extracts of opium was called laudanum. A tincture of opium containing approximately 10% powdered opium by weight, laudanum contains almost all of the opium alkaloids (defined below), including morphine and codeine. Its high morphine content makes laudanum a potent narcotic. (A tincture is an alcoholic extract of plant material.)

What is an Alkaloid? 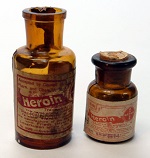 Opium contains a number of  alkaloids including the well-known narcotics morphine and codeine. Morphine was discovered as the first active alkaloid extracted from the opium poppy plant in December 1804 in Germany.

Heroin is derived from morphine. The Bayer Company of Germany introduced heroin for medical use in 1898.

The terms ‘opioid’ and ‘opiate’ are often confused. From the Encyclopedia of Molecular Pharmacology:

Following this definition, we will be using throughout this site the term ‘opioid’ to describe all classes of this drug.

A Family of Addictive Substances

The following narcotic opioids are derived directly from the opium poppy plant:

Other drugs are derived from the above drugs.

Some narcotic drugs are created by making chemical modifications to natural opiates such as morphine. Some examples:

Drugs that act on the body and mind like opium and its derivatives, but which do not themselves contain any opium in them are synthetic opioids. These are created in laboratories and have similar effects as opium, including similar side effects, yet they do not contain any derivatives of the poppy plant.