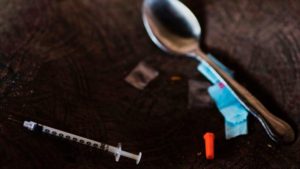 Photo taken April, 2017 shows a needle, spoon, and narcotics bag near a heroin encampment in a neighborhood of Philadelphia. (DOMINICK REUTER / AFP/Getty Images)

The bulk of the funds, $972,937, will go toward crisis drug treatment services, said Chris Garrett, a Maryland Department of Health spokesman. The rest will fund expanding halfway houses.