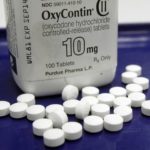 The 2014 numbers, the latest available for every state and the District of Columbia, reflect a 64 percent increase for inpatient care and a 99 percent jump for emergency room treatment compared to figures from 2005. Their trajectory likely will keep climbing if the epidemic continues unabated.

The report, released by the Agency for Healthcare Research and Quality (AHRQ), puts Maryland at the very top of the national list for inpatient care. The state, already struggling with overdoses from heroin and prescription opioids, has seen the spread of the synthetic opioid fentanyl, which can be mixed with heroin or cocaine and is extraordinarily powerful. Gov. Larry Hogan (R) this year declared a state of emergency in response to the crisis.

A state report released this month showed that opioid-related deaths in Maryland had nearly quadrupled since 2010, and deaths from fentanyl had increased 38-fold in the past decade. Baltimore City saw 694 deaths from drug and alcohol-related overdoses in 2016 — nearly two a day, and a stunning spike from 2015, when 393 people died from overdoses.

“We see overdoses in all ethnic groups, in all Zip codes,” said Leana Wen, the city’s health commissioner.